BEST is a voluntary international association, apolitical, non-profit and non-representative of the students of technical universities in Europe.

In 1987, students in mathematics and physics from 12 European universities met in Stockholm. This assembly was called International Week.

Another important decision was to increase the board of the meeting throughout Europe. In 1988, Grenoble was chosen to organize the second International Week. During this meeting, we discussed the objective of this association. In the same year, BEST was recognized by the French government as a non-profit organization. The name of the organization was also discussed during the meeting. After numerous proposals, such as: EAU – European Association of Universities, NBS – No Business School, EST – European Students of Technology, it was decided that our organization will be named BEST – Board of European Students of Technology.

We seek the ability to make changes and to deal with changing conditions. We are open to everything new. We value and nurture the ability of being mobile and to quickly respond to changes in the environment or to any other obstacle that we may face.

We gain skills and understanding through experience. We value everything we learn through the experience of being involved in our activities and we strive to learn as much as possible from every aspect of our work. We value personal development and strive for an open learning community where we have the freedom to share and develop ideas.

We strive to continuously improve the standards of everything we do. We use all our creativity to enhance the way we work. This is to guarantee the constant development of our actions.

BEST members consider this aspect as an important asset: Establishing good relationships where people help, support and care for each other. Accordingly, we value positive personal relations and teamwork.

We enjoy everything we do. We value the positive emotions of the people involved in our actions. We strive to make our activities enjoyable to everybody who is connected to them. We act with passion and strive to share this passion with the people around us.

People understand and respect different cultures and societies. The diversity in a society directs people to achieve their full potential and to act responsibly.

Our whole organization has its vision “to promote diversity”. The events and actions that we realize involve persons and entities from different socio-cultural, geographical areas, fields – we like to be open, to know, to accept, to develop.

BEST encourages students to engage in various activities and projects both nationally and internationally, to develop the ability to work in a culturally diverse environment.

By our actions we offer students opportunities for personal development: through seasonal courses we encourage them to travel, through engineering competitions they can test their limits and theoretical knowledge in technology and through career events we support them in choosing a successful career. 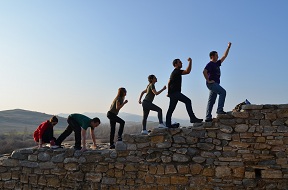